From Legends of Aria Wiki
Jump to: navigation, search
This article may need cleanup to meet quality standards.
Please help improve this if you can. The Discussion page may contain suggestions.
Reason: "What are the Militia ranks, can we get icons of the Militia, has any new stuff been added to Militia rewards?"

The information on this page is outdated. The ranks and the rewards described no longer exist. With point release 10 and the official launch of the game, the militia system has been temporarily disabled. All players that were part of a militia have been removed from it and it is no longer possible to join one.

In Celador, players may choose to pledge their allegiance to one of three major towns in the game. These towns are Pyros, Helm, and Eldeir. Players may pledge allegiance to their preferred town in one of two ways: 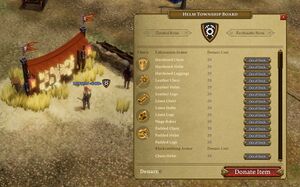 Players may pledge allegiance to one of the three towns by locating and speaking to the Mayor of the town. Doing so allows players to access Township Boards where they may purchase and sell items with Crowns.
Players can only be in one Township at a time. If players wish to change their allegiance, they must leave their township and speak to the Mayor of their desired town.

In addition to regular Townships, there exist Township Militia. Militia act as a faction system within Legends of Aria that vie for control over Celador for their towns. Militia players may actively attack rival Militia without repercussion and can earn rewards for slaying rivals and participating Militia events.

To join a town's Militia, players must meet the following conditions:

Joining a Militia will also automatically make the player a member of the town's respective Township too. Players are required to give a minimum of 7 days service to the Militia before being allowed to resign.

If a player wishes to leave or change their allegiance, players must use the Allegiance menu located on toolbar at the bottom of the screen (looks like a red and blue shield) to resign from the Militia. Clicking on the resign button will trigger a 7 days notice period. After 7 days, the resigning player must return to the Militia recruiter to confirm that they wish to leave. Players will lose all progress they have made in their allegiance upon leaving.

The following table shows the ranks, percentile/standing for each and names for each rank within Allegiances:

Militia rewards can be purchased from the the Allegiance Vendor in Belhaven. The vendor is only available to the Militia that controls at least 2 of the 3 King of the Hill locations. Rewards can be purchased using Talent which is earned from events. Talent and the rewards are blessed and will not drop upon death.

Below is a table of all the rewards and cost.

There are two different events that take place within the Militia system which are there to encourage PVP and to help Militia players gain Talent or access to the allegiance vendor in Belhaven and to gain ranking within their Militia.

When events are active, Militia members will be notified via a broadcast and a marker will be visible on the map to show the location of the event. There will also be a broadcast 15 minutes before an event starts. Players can check how long until the next event via the Allegiance window found on the toolbar.

Events will alternate between the two different types of events and will start randomly up to 150 minutes after the previous event has finished.

While Militia members are in event zones an event overlay will be displayed that shows the current score, time remaining, and a description of the event.

Players will also have the chance to increase their rank if they manage to subdue enemy Militia players.

‘‘Capture the Flag’’ or CTF is a player-run event that occurs in each of the Militas' towns. Within the towns are flags that Militia may steal and take back to their towns to capture.

‘’King of the Hill’’ is an event where militia players fight to control a small area for 30 minutes. Militias scored points when only their team has control of the event area. After 30 minutes, the team with the most points wins the event. A player's team will not earn points if they are dead or cloaked in the zone.

King of the Hill will spawn periodically within the following areas:

Cleansing Spirits was a 30 minute event that takes place in large designated zones. Allegiance players had to compete to hunt down Lost Spirits and cleanse the area of them.

Spirits would spawn continuously for the whole event time. Players would earn allegiance currency, then called Salt, based on the damage they dealt to spirits. Salt could then be used to purchase Allegiance rewards.

Cleansing Spirits used to occur periodically in the following locations: