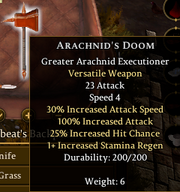 It is a two-handed weapon that uses the following abilities:

Arachnid's Doom is a rare drop that will drop straight into your backpack from the following mob: