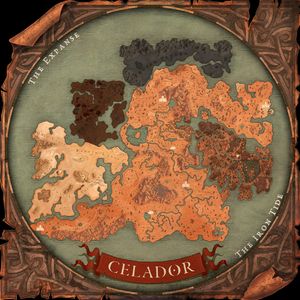 The Map of Celador as seen in the game.

Celador (the Shard of the Humans, see Aria) is the current place in which the game occurs and is the home of all characters created. Celador is divided into eight regions: Barren Lands, Black Forest, Eastern Frontier, Frozen Tundra (not available yet), Southern Hills, Southern Rim, The Outlands (not available yet), and Upper Plains. Each one of these regions has minor regions as can be seen in the map of Celador. It is advised that new adventurers should pay attention to zone security rules before moving around.

Players can explore Celador by foot, riding a horse, using the seven gates that link important points, entering portals made by players, or using the hearthstone. Some restrictions, however, are applied to outcast characters. They cannot enter towns or pass through portals.

The map of Celador can be seen in four forms. In the game, press "M" to access the map memorized by your character. You will note that only the region you started is uncovered, but you can uncover the other regions buying the corresponding maps. You can find these maps in major cities such as Valus and Pyros Landing. The map is consumed in the process. Whenever you find a point of interest, a small-rounded circle will be added to you memorized map. Beyond the memorized map ("M"), you can buy an atlas and add the same maps you buy to memorize to it. An atlas bought from NPCs will be empty (all regions covered in fog) and you will need to fill it. The advantage compared to the "M" map, however, is that you can add waypoints to an atlas. Last but not least, you can use the interactive map within this article. It holds the most interesting points of Celador you might want to know.

Of all the remnants of Aria floating above the shrouded maelstrom of the ruined world below, Celador is at once it's most pristine and most corrupt.
Isolated from history by the dead gateway abandoned by its inhabitants, it fosters an ancient people who worship Tethys, the Goddess of Water.

Her shrine lies in the great Temple of the city of Petra, but their way of life is besieged by a mad cult bent on slaughtering the townspeople,
while the dead stir in the depths of the earth in which they were once interred.

Why, in this land of green life and bountiful water are only a chosen few capable of wielding the might of their Goddess?
Why do the undead rebel against their peaceful slumber?
Celador's beauty is belied by the secrets of generations past, and the veil is being pulled back as the gateway reawakens...

To look at Celador in detail check out the Interactive Map.