Crafting is the art of creating items out of resources by using crafting tools and crafting stations.

There are currently 2 categories of crafting related skills:

Tools of the trade[edit | edit source]

Tools are required for many of the gathering skills and may be required by certain crafting and augmenting recipes. If you don't have the right tool for a given job the task may be more difficult or simply impossible. Sometimes a weapon may work as a makeshift tool and vice-versa; for example you can chop down a tree with a battleaxe, but the results are likely to be less than optimal.

Crafting Stations are required for many of the crafting and augmenting skill recipes. These are specialized areas in the world (either permanent or portable) creating the correct conditions for players to craft items. Some simple recipes may not require a crafting station.

If the player wishes to increase their crafting skills, they must avoid crafting Trivial items and instead work on another item to craft.

As of Hotfix 7.28.20 of Point Release 10, upon hitting Grandmaster skill of any crafting profession, all recipes in that profession become trivial.

Collecting resources is the first step in crafting. Resources can be found in many places, both natural and otherwise, all over the Shards and you may even be able to buy them from merchants or other players.

To gather resources you will typically need to have the correct tool in your inventory and some level of the appropriate Gathering Skill. You can then simply approach a harvest-able node (pile of rocks, trees, plants, animal corpses, etc.) and left click to attempt to gather the resources. You may be able to make multiple attempts to gather from a single node and the resource will disappear (or change) when it is depleted. Depending on your skill, your tool and the difficulty of harvesting the particular resource, you may fail entirely or you might even get lucky and find a rare resource.

Gathering has been implemented in Celador and certain other worlds. You can currently gather a variety of resources of the following types: 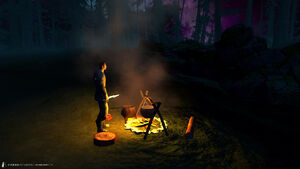 Cooking over a Campfire.

You can cook raw animal meat by roasting it over a Campfire. This requires no skill and will make raw meat edible, but does little else for the dish. Creating a Campfire requires you to have several pieces of wood in your inventory, although you can use someone else's Campfire just as easily.

If you have the Cooking Skill and a Cooking Pot along with some additional ingredients, you can cook considerably better meals which will provide more sustenance and, potentially, temporary bonuses as well. Combine your ingredients in the Cooking Pot and heat with a nearby Campfire to begin to experiment with your own recipes.

Crafting speed is effected by Prestige Passives that can be unlocked by completing profession quests respective to a particular skill level.

Non-Trivial recipes are recipes that typically aren't 100% success and can still give you skill gains.

Trivial recipes are recipes indicated by a 'trivial' tag on the top right corner of the crafting window. Typically these recipes do not give you skill gains and have 100% success rate.