From Legends of Aria Wiki
Jump to: navigation, search
The information in this article is up-to-date as of version Early Access v0.8.7.

Guild Wars are a feature added in the Point 6 release with the aim to increase the ability for players to participate in consensual PvP.

Guilds can participate in a guild war by declaring war on another guild via the "war" tab on the guild window by searching for the guild you wish to declare war with:

Only officers of the guild can declare or accept an invite to war. Once a declaration of war has been sent the receiving guild will have up to 24 hours to accept or reject other wise it will automatically be rejected. 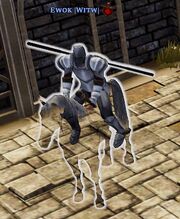 You can have a maximum of 10 outgoing war declarations.

Guild wars have are active for a set time of 24 hour, 7 day or 30 day duration. During that time you can freely attack an enemy guild member without fear of guard intervention or karma loss. Once an incoming war
declaration is accepted, the war begins! Guild members will see a “Guild War Icon” on enemy guild members. Slain enemies are able to be looted freely.

Guild officers can surrender and immediately end the war. If you leave or are kicked from a guild that is at war you remain in the guild and the war until you log out.