Martial Prowess is a combat skill that was introduced in Early Access v0.9.0..

Martial Prowess determines the effectiveness of martial abilities and offers a damage bonus with melee and ranged weapons.

The Martial skills use Bloodlust as a resource. There is no stat tied to Bloodlust.

A character can gain Rage points by inflicting and suffering damage when under the effect of the Bloodlust ability(see below). Damage inflicted through spells will not give Bloodlust, but damage suffered by spells will. The same applies to Sorcerer Powers. Ranged weapons will give Bloodlust when inflicting damage.

The martial abilities are accessed through the Martial Book.

When you create a character with the Martial Prowess skill, you will start with the book. Else, you can buy it from the scribe of any city for 200 Gold.

The book is blessed, it will never break and will not drop on dead.

No scrolls are necessary for the Martial Abilities, the book contains all the skills. 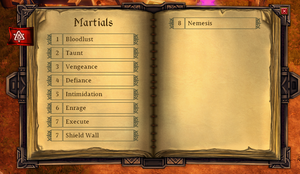 By double clicking on the book you will be presented with the list of the martial abilities that you can use. The following table lists the abilities:

Martial Prowess gives a % bonus to attack based on your skill level giving a 100% bonus when you are GM in the skill. This bonus is added to the one given by strenght, Vigor and weapons bonuses.