A Merchant is a type of hireling that may be recruited by players. Merchants can be asked by players to sell their belongings on their Housing Plot. Merchants will only sell items that they are instructed to and can handle sales without the player's presence.
If a merchant makes a sale, the merchant will take a 10% cut from the sale price and will notify the player via a private message.

Merchants can be easily identified by their brown clothing and the title beneath their name. If the merchant has yet to be hired, the title "Merchant For Hire" in yellow will be shown. If the merchant is working (or about to be working) for someone, "Hired Merchant" will be displayed instead.

Merchants will remain active as long as the plot still exists and remains under the player's ownership, even if the player is offline. If the player removes their plot, transfers their plot to someone else, or is banned, the merchant will delist any items for sale and despawn.

from the player's inventory, stand at the desired spot, and begin their services as a merchant.

Note: Merchants will not follow players across regions (be it through Gates or across region borders). If a merchant becomes stuck or does not seem to be following the player, they can be recovered via stuck command.[1] 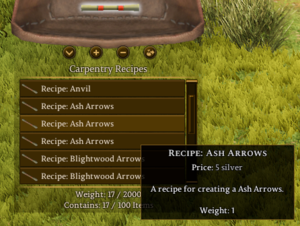 Items may be sold from within locked-down containers

A window that appears when putting an item for sale

To sell items via the merchant, the player must either place their wares on the ground or inside a container. Players must then speak to their merchant and tell them "I have something for you to sell". The merchant will then ask the player which item to sell; the item must not be locked down. Click the item to sell and a dialog box will appear asking what to sell the item for. Upon listing a price, the item will be locked down and put up for sale.
If the player has made an error or no longer wishes to sell the item, players may right-click the item for sale and click "Remove from Sale".

Note: When listing a price, prices MUST be listed in gold. For example: to sell an item for 2

, players must input 20485 as the selling price. Furthermore, the sale price entered does not factor the merchant's cut. Listing a price of 300

If a player no longer wants a merchant at their plot, players may fire them by telling them "I no longer require your services". The merchant will then ask the player to confirm this. Confirming the dismissal will then cause the merchant to play a teleport animation and despawn. A merchant may only be fired if they have nothing left to sell. Players must remove all items from sale if they wish to fire a merchant.
Should a player wish to hire a new merchant, players may perform the steps listed above. This will cost the player another 1

Players can interact with the vendor to check one of two ledgers:

Players can select this option from the drop-down menu to see all of the items that are offered by the vendor (or non-owners can open other player vendors by double clicking the merchant). Players can interact with this list to purchase directly from the vendor or purchase the item from the container it is stored in.

Owner can access this through the “Show me your ledger” option on their merchant dialog. The ledger will display the last 50 items sold including the item name, price, buyer, and sale date.

A merchant may be found in the following locations:

Merchants have a variety of different names. These names are randomly generated whenever a new one is spawned. The following is a list of known merchant names: