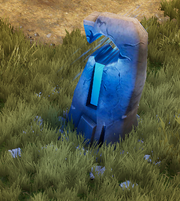 Resurrection Shrines are static locations scattered throughout Celador that provide a place for recently deceased players to recover their body. They are identified by a symbol (right) on the mini map. This icon only appears while dead. The stone itself resembles a large Adder Stone that glows with a blue light. There are also shrines outside major Towns that resemble a statue of an angel surrounded by a fountain. Currently, to use a resurrection shrine, a player must run as a ghost to the shrine and get within range. As soon as they are close enough, a window will appear asking if they wish to resurrect. There is no penalty or cost of resurrection at a shrine - other than the cost of lost gear if killed and looted by a player.

The Player can then choose to be resurrected and then will be brought back to life with nothing on them but items that are blessed.

Outcast Shrines function as a Resurrection Shrine for Outcasts and are only found in the Wilderness. They are visually identical to a standard resurrection shrine, except they glow red instead of blue.