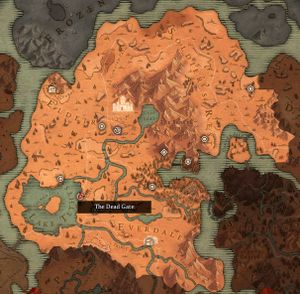 The Dead Gate is a point of interest in the Upper Plains in Celador. Typically there are no mobs or NPCs in the area.

During an event in February 2019, players could purchase Power Hour Potions and the Relic of the Ancients by turning in relic fragments to an NPC that was staged at the Dead Gate.

In September 2019 the servers Azure Sky and Verdant Earth were clustered together to create Ethereal Mountain. The 2 servers are connected via The Dead Gate.

The link was opened with an event that saw both servers collect relics to enable cross server travel.