From Legends of Aria Wiki
Jump to: navigation, search
The information in this article is up-to-date as of version Early Access v0.8.5.

Treasure hunting is a specialization skill and determines your ability to decipher treasure maps, locate and dig buried treasures out. Higher level of that skill allows deciphering higher level maps.

It requires the use of a shovel to dig out treasure. The chest is *locked* when it spawns, but will automatically unlock after all of guardian spawn are dead. Alternatively, a player proficient in Lockpicking skill can open the chest while the guardians are still alive.

Upon acquisition of a map, it can be studied (right click and choose "Study", or double click) to find the area the treasure is located and to reveal the quality of the map (see the maps section below).

Once you are in the correct area, the map can be studied again to locate the treasure precisely. You will get an on-screen message indicating which direction you should travel to find the dig area. Beware, each attempt to study a non-trivial map will slowly degrade it off until destruction.

Once you get the message reporting "treasure is nearby", you must equip a shovel and use the ability to dig (default: Q). The chest is always located at the center of the treasure area.

Once the treasure is discovered the map will be destroyed and the guardian spawn will appear. The treasure chest is locked and can be picked, however killing all the monsters will unlock the chest so Lockpicking is not a required skill for land-based treasure maps. Dug up treasure chests last for 30 minutes

There are several levels of maps:

In addition to level, there are different qualities of maps. The quality determines the size of the area you'll have to search:

The chest is always located at the center of the dig area. 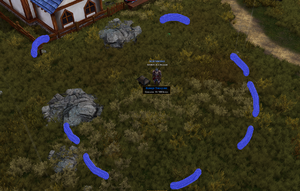 Once you get the message "the treasure is nearby" you know you are in the right area. The dig area that you'll need to search is determined by the map quality (see above).

If your map is in good condition, it is advisable to try to search for the edges of the dig area by checking the map repeatedly as you move around. Once you find the edges of the dig area, the actual treasure location is at the center (knowing the center will allow you to dig up the treasure in a few tries instead of digging over a hundred tiles.)

As you dig, there are 5 possible results:

The blue marker in the picture are the outer edges of the treasure area for a vague map.

The following NPCs can train your skill to 30 for 300